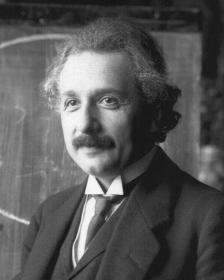 
Albert Einstein
(1879—1955)
U.S. scientist
Make everything as simple as possible, but not simpler.

Albert Einstein
(1879—1955), scientist
I think and think for months and years. Ninety-nine times the conclusion is false. The hundredth time I am right.

Albert Einstein
(1879—1955), scientist
It is easier to denature plutonium than to denature the evil spirit of man.

Albert Einstein
(1879—1955), scientist
The hardest thing in the world to understand is the income tax.

Albert Einstein
A human being is a part of the whole called by us universe, a part limited in time and space. He experiences himself, his thoughts and feeling as something separated from the rest, a kind of optical delusion of his consciousness. This delusion is a kind  […]


Albert Einstein
A hundred times every day I remind myself that my inner and outer life depends on the labors of other men, living and dead, and that I must exert myself in order to give in the measure as I have received and am still receiving.

Albert Einstein
A man has to work so hard so that something of his personality stays alive. A tomcat has it so easy, he has only to spray and his presence is there for years on rainy days.

Albert Einstein
A man's ethical behavior should be based effectually on sympathy, education, and social ties; no religious basis is necessary. Man would indeed be in a poor way if he had to be restrained by fear of punishment and hope of reward after death.

Albert Einstein
A person starts to live when he can live outside himself.

Recent updates:
pipe
[pipe] See: [PUT THAT IN YOUR PIPE AND SMOKE IT].
play for keeps
[play for keeps] {v. phr.} To take an action of finality and irreversibility. * /"Are you serious about me?" she asked.  […]
Gallegher
American comedian I don't know why they say "you have a baby." The baby has you.
как с гуся вода
[как с гуся вода] {adv. phr.} [kak z `gusya vo`da] {literally} like water off a goose. Without producing any  […]