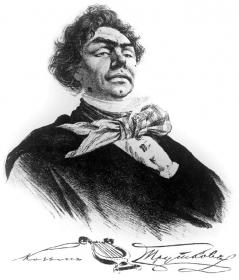 Kozma Prutkov — a collective pseudonym for the group of Russian writers — Alexey Tolstoy and Zhemchuzhnikov brothers, who performed jointly in 50—60s of the 19th century.
No categories:

» In Russian
To section: P


Kozma Prutkov
A champagne cork that pops up with so much noise and falls down just as instantly — that is a fair picture of love.

Kozma Prutkov
A philosopher would easily triumph over the future and past sorrows, but he is just as easily defeated by the present ones.

Kozma Prutkov
A sensitive man is like an ice-pick: be warm to him and he melts.

Kozma Prutkov
A specialist is like a gumboil: his plenitude is unilateral.

Kozma Prutkov
An egoist is like someone sitting in a well since long ago.

Kozma Prutkov
And once again: nobody will embrace the unembraceable!

Kozma Prutkov
But, on the other hand, the Sun is better in that it shines and also warms, whereas the Moon only shines; and that only on moonlit evenings!

Kozma Prutkov
Buy a painting first, and then frame it.

Kozma Prutkov
Considering a possible undertaking, think about whether you'll really succeed in it.

Recent updates:
P.J. O'Rourke
(1947--), Modern Manners It's bad manners to apply cosmetics in public. It reminds people that you need them.
слон в посудной лавке
[слон в посудной лавке] {n. phr.} {literary} [slon v po`sudnoj `lavk'e] {literally} Elephant in china  […]
be even-Steven
[be even-Steven] {v. phr.} To be in a position of owing no favors or debt to someone. * /Yesterday you paid for my lunch, so  […]
check off
[check off] {v.} To put a mark beside (the name of a person or thing on a list) to show that it has been counted. * /The  […]