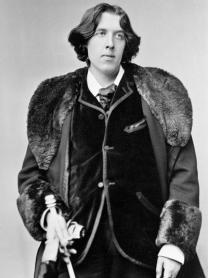 Oscar Fingal O'Flahertie Wills Wilde (October 16, 1854 – November 30, 1900) was an Irish playwright, novelist, poet, and short story writer. Known for his barbed wit, he was one of the most successful playwrights of late Victorian London, and one of the greatest celebrities of his day. As the result of a famous trial, he suffered a dramatic downfall and was imprisoned for two years of hard labour after being convicted of the offence of "gross indecency". The scholar H. Montgomery Hyde suggests this term implies homosexual acts not amounting to buggery in British legislation of the time.
Categories: Biographies Wilde Oscar
To section: W


Oscar Wilde
(1854—1900), Irish author
Always forgive your enemies; nothing annoys them so much.

Oscar Wilde
(1854—1900), Irish author
I dislike arguments of any kind. They are always vulgar, and often convincing.


Oscar Wilde
(1856—1900), Irish author
A little sincerity is a dangerous thing, and a great deal of it is absolutely fatal.

Oscar Wilde
(1856—1900), Irish author
A man can live three days without water but not one without poetry.